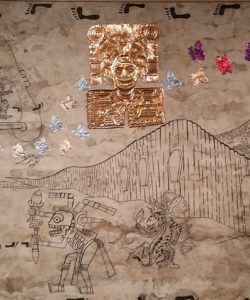 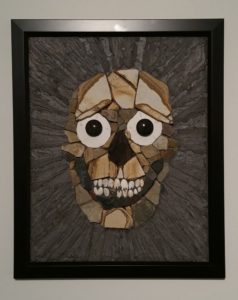 The word “border” holds many connotations in today’s political climate, which makes it a rich subject for artists. From February 6th to 27th, 2019, the MK Gallery on Portland State campus featured works concerning the definition of borders, how we build physical and intangible borders, and how we perceive borders in our daily lives. None of the pieces made blatant references to the borders of countries, but instead created a collective theme of division, exclusion, and mobility. Some pieces hinted at spiritual borders or borders within our identities, adding to the general theme of internationality.  The wide range of mediums captivated the senses with videos, pieces that covered entire walls, and designs repeated through a variety of sizes and materials.

The scale of the works is what held my attention the most. I stood for what seemed like hours staring at a scene of ancient mesoamerican figures crossing into a modern cityscape which took up an entire wall. A skull that reached the ceiling offered an opportunity to study the huge brushstrokes it took to paint it. Some of the photography hinted at narrative but mostly evoked feelings of transition through time, as did the videos. The piece that was featured on the posters, however, was an American flag decorated in beautiful floral paintings, plants one might imagine in a garden, a park, or even along a chicken-wire fence. The way it swayed with the draft was mesmerizing.